FEAR THE BEER. If any team could do it, it would be San Miguel.

When the final buzzer sounded and the confetti fell upon the Smart Araneta Coliseum, the Beermen had their arms raised in victory. They edged the Magnolia Hotshots 72-71 in a grueling, low-scoring Game 7.

Despite being down 17 early, San Miguel channeled that championship spirit that’s been with the franchise for decades. And it was enough, pushing them to their fifth straight Philippine Cup title – a league first.

Fajardo’s 31 rebounds broke Marcelo Simbulan’s record of 29 from way back in 1975, the PBA’s opening season.

The final board was crucial, taking down a Jio Jalalon miss at the 4.8-second mark to clinch the game.

Alex Cabagnot led the Beermen in scoring with 18 points. He hit a go-ahead baseline fade-away with 57.2 seconds left.

Terrence Romeo, who had never won a championship in the PBA (or even in college), was delighted to bag his first.

The high-scoring guard failed to find his shot in the final game of the series, only finishing with 4 points. He did add 7 rebounds, 3 assists, and a steal. Prior to the Finals, the FEU alum joked that he could retire early if he ever wins a championship. He immediately retracted his statement in a post-game interview. 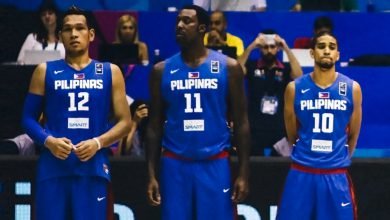