Nothing says “Filipino” like the jeepney. Vibrant, decorative, and noisy as hell, the vehicle is recognized as the one true king of Philippine roads. Stylish in its own right thanks to its wild colors, catchy signs, and beautiful body art, a jeep is hard to miss when one comes roaring down the street. But even the mightiest kings fall, and it seems the jeepney’s reign may soon be over.

The jeepney traces its roots to World War II, where a number of them were left behind by American troops after the war. And when Leonardo Sarao Sr. established Sarao Motors, the jeepney quickly became the symbol of Philippine public transportation.

Being the first to see the potential of making them public vehicles, Sarao Motors improved on its utilitarian design by adding decorative ornaments like horses and trumpets, extending their bodies to hold more passengers, and installing railings on the roof to hold more cargo. The jeepney became such a hit that it was even exhibited in the U.S. and became part of a roadshow in Europe. It truly brought to surface Filipino ingenuity on a world stage.

Despite being the country’s cultural symbol for decades, the jeepney started to lose its luster with the introduction of other public utility vehicles such as buses and taxis. The once proud king of the road slowly whittled down and became a shell of its former self. Even though the colorful and decorative body is still present, one can’t help but notice how the jeepneys of today suffer from a myriad of performance issues.

While most jeeps can still go full speed, notice how drivers have to pump the brakes numerous times to stop. No wonder accidents caused by jeepneys that lose control of their brakes have become so common. Engine performance has also been an issue since a jeepney’s engine has become a mish-mash of scrap parts put together to build a functional motor. Rarely will you see an engine built using brand new parts due to high costs required.

Aside from performance, security has become an issue when riding jeepneys. While there will always be criminals in big cities, it seems jeepneys have become favorite targets, leaving passengers susceptible to petty thievery. Necklace snactching and pick-pockets coming in and out easily have become everyday occurrences in jeepney rides.

Lastly, in this day and age where gender equality has become highly regarded, today’s jeepneys unfortunately still take pride in carrying a “macho” image by showing off sexist and patriarchal signage (Basta sexy libre sakay, etc). While some commuters smile at these things, it harkens to a dated culture where men were looked at as stronger and while women were just relegated to men’s fantasies. It’s time to move on from that.

Modernization as the Last Recourse

So here we are in the 21st century, and the jeepney has become an artifact representing stunted progress. Since last year, the government has been adamant about eliminating jeepneys that are more than 15 years old to reduce vehicular breakdown and accidents. Through its PUV modernization program, the iconic jeepney will be given a long-awaited upgrade, and we should be all for it.

The new jeeps will have new and better performing engines as well as cleaner emission, plus a longer body capable of accommodating a total of 22 people. It will also have a side-door located near the driver that will serve as the passenger’s entrance and exit point enabling him to see those coming in and out of the vehicle.

A new fleet of modern jeepneys can be a new source of pride. As we exhibited our resourcefulness then with what we did with the American jeeps, perhaps we can now proudly roll out something truly Filipino. By the Filipino, for the Filipino.

Because at the end of the day, the jeepney’s still sticking around. A lot of drivers still rely on it to make a decent living, and let’s be real, they aren’t disappearing all in one go. However, just because they’ll still be here for some time, it doesn’t mean they shouldn’t be given an upgrade, especially those that have been on the road for more than a decade.

For the new breed of jeepneys, the general public is hoping they live up to the tradition of their predecessors. To the old jeeps, thank you for your service, but you belong in a museum. 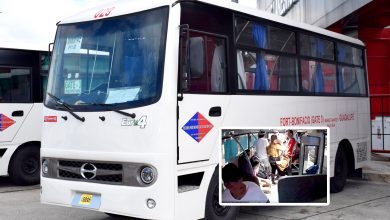 Alyas Linda and PUV Modernization: The Truth Will Set Us Free

First Barge Terminal in Philippines Set to Open Next Month