As we enter a new decade, we look back at how much our political landscape has changed in the last few years, and we can’t help but ask: Is the Liberal Party still relevant?

They say the only thing constant is change. In the case of the Philippines, change has certainly come. It has come in the form of a Golden Age of Infrastructure, a surging economy, and so much more. And in the realm of politics, it seems that one of the longest and most influential political parties in the country, the Liberal Party, has fallen victim to this tidal wave of change.

It’s difficult to pinpoint the exact moment when Partido Liberal started to lose its popular support – but surely, it must have been sometime during the presidency of Benigno “Noynoy” Aquino III. As we all know, Noynoy’s stint as commander-in-chief was mired in corruption and incompetence – a sinking ship of inept pirates salvaged only by their captain’s family name. Which scoundrels come to mind? For starters, Abad, Abaya, Padaca, Purisima, Ochoa, Soliman, Honrado, and of course, De Lima, are names we will never forget.

Then there’s Golden Boy Mar Roxas, we can call him the flagbearer for the beginning of the end. It was Roxas’ failure to succeed Noynoy that cracked the hull.

Fast forward to 2019. A massively popular Rodrigo Roa Duterte continued to steamroll his political opponents. This prompted the leaders of the Liberal Party to call for reinforcements. Desperate for an opposing coalition, they formed a rag-tag bunch of aspirants, with Bam Aquino and Mar Roxas leading the pack. Fellow Partido Liberal members Erin Tañada, Samira Gutoc, and Chel Diokno were also on board. Virtual no-namers Gary Alejano, Florin Hilbay, and Romulo Macalintal rounded up what they called Otso Diretso – marketing themselves as a cast of heroes ready to tip the scales of power in the Senate.

Otso Diretso ran a campaign flush with virtue-signaling. They spouted rhetoric contrary to the progress Filipinos had been enjoying under the first half of the Duterte presidency. Going against the current, they attacked the popular President with every chance they got.

It backfired. Otso Diretso performed miserably in the 2019 elections. Their highest placer was a youth-pandering Bam Aquino, who only managed to finish 14th. By this time, the Liberal Party was left clinging to flotsam.

So here we are, weeks into a new decade, carrying over confidence from the last few years, and flush with optimism for those to come. And what of the Liberal Party? It seems they are left with no adequate leader.

With Aquino and Roxas reeling from possibly career-ending losses, and the once feisty rabble-rouser De Lima wasting away in detention, who do they turn to? On the surface, it seems they’re opting for the default choice: Leni Robredo. It’s Robredo who they’re hoping can build some kind of momentum leading up to 2022.

Unfortunately for Robredo, she has turned into a proverbial punching bag on social media. And why is that? Precisely because she is sticking to the Liberal Party playbook of proven losers: negative rhetoric.

She continues to charge head-first into the brick wall of Rodrigo Duterte. The short stint with the Inter-Agency Committee on Anti-Illegal Drugs was a PR disaster for her. And what did she do with it? She decided to double down, and try, and fail, to embarrass the popular Duterte on the heels of the latter’s astronomical approval ratings.

On social media, opposition mouthpieces such as Leah Navarro, Yoly Ong, Jim Paredes, and the like, continue to spew their usual rubbish. They hate Duterte. Robredo is infallible to them. And what does this do for the Liberal Party and its message? Absolutely nothing. Ask anyone – what does Partido Liberal stand for? They couldn’t tell you. They hate a President almost everybody loves? It’s mind-bogglingly stupid.

It seems as if centuries have passed since Corazon “Cory” Aquino was revered like a saint in these islands. Surely, she left enough of a legacy to get her son elected. But it appears the “L” hand sign stands for something very different for their political ilk these days. Perhaps the Liberal Party has finally sailed into the sunset.

Their alarmist tone in their criticism of this administration simply implies that Duterte’s men have done nothing right. We all know that’s the farthest thing from the truth. “No Smoking,” as Diokno mockingly said. You see, you can’t fool Filipinos that easily anymore. If you’ll lie to our faces, we can tell you’re lying. Your party has tried to be a “true opposition” but has merely concocted a half-baked PR job to discredit. Nice try, but maybe it’s time to tie a yellow ribbon on some funeral flowers and call it quits. 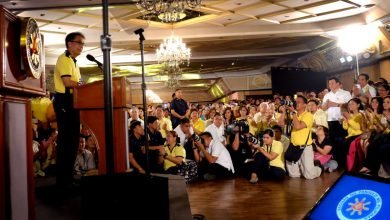 Lies and Deception: Otso Diretso and the Dirty Battle for Power